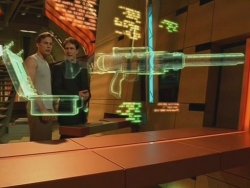 While saving a New Mutant from two Russian bounty hunters who work for The GSA, Brennan is hit by a blast of an unknown weapon, which can kill him in a short time. Meanwhile, a teenager wants to sell his father and stepsister (both New Mutants) to Eckhart.

Preceeded by- I Scream the Body Electric(Part 2)

Followed by- Fool for Love

Retrieved from "https://mutantx.fandom.com/wiki/Russian_Roulette?oldid=4203"
Community content is available under CC-BY-SA unless otherwise noted.