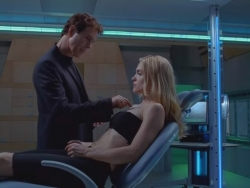 A New Mutant named Brennan Mulwray is captured by The GSA and turned into one of their agents. He however betrays them and together with Emma joins Mutant X.

Retrieved from "https://mutantx.fandom.com/wiki/I_Scream_the_Body_Electric(Part_2)?oldid=3726"
Community content is available under CC-BY-SA unless otherwise noted.